How to Prepare for Mosquito Season

Nothing ruins a day faster than seeing a big red mosquito bite when you’re trying to enjoy the beautiful Texas outdoors!.

Not only are mosquitoes annoying but they can carry harmful diseases like West Nile Virus, Zika Virus, Yellow Fever, and Malaria.

So what can we do to ward off these annoying pests? You may never be able to get rid of mosquitoes completely, but there are several preventive measures you can take to help you prepare for mosquito season.

Here we will look at the period when mosquitoes are most active and how to prevent mosquitoes from bothering you and your family.

Why Homeowners Should be Concerned About Mosquito Season

Spending time outside with family and friends sounds like a great idea, but during mosquito season, you’ll find yourself retreating indoors to escape these pesky fellas.

Not only do they leave us itching and scratching, but mosquitoes can be dangerous to humans. And nobody wants to sit around with smelly insect repellant when they’re trying to enjoy their backyard barbecue.

Oftentimes, mosquito bites don’t cause lasting harm. It’ll itch and cause mild irritation for a little while. However, Mosquitoes can transmit several serious human diseases which can be fatal.

Mosquitoes have a proboscis (elongated mouthpart) that is far beyond their heads. Think of it as a tiny needle. When a mosquito bites you, it uses its proboscis to pierce your skin, suck your blood, and discharge its saliva into your bloodstream.

When they secrete their saliva, your body infuses it as an allergen. Your immune system then sends histamine to the area of the mosquito bite to remove the allergen. This chemical, Histamine, is what causes mosquito bites to swell and itch. For some, the swelling and itching are more intense and may be allergic to mosquito bites.

These flying pests spread diseases through their bites. Mosquitoes are vectors that transmit diseases between animals and pets. An infected mosquito that has fed off an animal or person with the diseases and then proceeds to bite you will transfer those pathogens into your body.

According to research carried out by the World Health Organization (WHO), there were over 200 million cases of malaria in 2015 caused by mosquitoes. That makes it one of the deadliest animals on earth.

Ask for a FREE QUOTE

When Does Mosquito Season Start?

When do mosquitoes come out? When does mosquitoes’ season end?

Contrary to what you might think, there is no actual calendar date to mark the start or end of mosquito season.

Typically, these pests are more active when the temperature starts to hit about 50 degrees Fahrenheit. However, the peak time depends on the area you live in, the life cycles of different breeds, and their tolerance to cold weather.

Generally speaking, warmer climates experience longer mosquitoes season when compared to cold climates. That’s why areas like Texas are known to have mosquitoes throughout the year.

“Mosquitoes season” is essentially year-round for Texans. That means we rarely get a reprieve from mosquitoes.

However, mosquitoes are typically more active in June, July, and August, but that doesn’t mean you won’t see a mosquito during the holidays.

Mosquitoes thrive under certain conditions, like damp and humid areas. Moisture from rain will cause their eggs to hatch faster.

The mosquito population could go from 20 to 20 million in just a short amount of time. When the weather is drier, you’ll likely see fewer mosquitoes flying around – but not if your yard gives them the water they need to lay their nests in.

Types of Mosquitoes in Texas 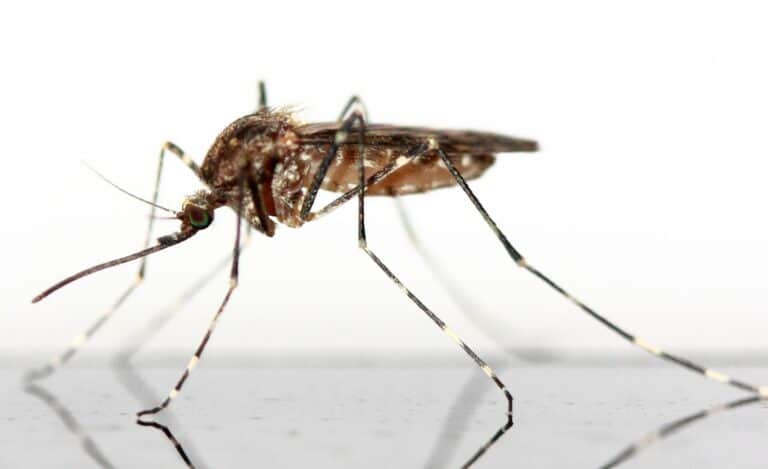 Did you know that there are over 80 species of mosquitoes in Texas? Fortunately for us, some don’t even bite humans.

The diversity of mosquitoes present in Texas counties will amaze you. Let’s take a look at a few of the most common ones:

Aedes Aegypti is a common mosquito breed found along Texas coasts. It is a small, dark mosquito with black and white stripes and banded legs. These yellow fever mosquitoes feed on humans, mammals, and birds.

They can hide and lay eggs in many breeding places like tree holes, plants, flowerpots, and even small bottles. Aedes Aegypti carries many illnesses like dengue fever, Zika virus, and Chikungunya virus.

They bite throughout the day and can live for up to three weeks. Since they live near people, they are likely to transmit more diseases than other species in mosquito season.

There are over 19 species of mosquitoes in Culex, but the Culex Quinquefasciatus, also known as Southern House Mosquito, is the most common in the Texas area.

They are medium-sized with a brown body color. Although these species prefer to feast on birds, they can still enter indoors to bite humans. Culex Quinquefasciatus breeds in polluted water and containers.

When their females are ready to breed, they can lay up to four rafts of eggs; one raft can contain thousands of eggs depending on the mosquito, weather, and other factors.

Southern House Mosquitoes bite humans and birds at any time of the day. They are the main carriers of the West Nile virus, but they also transmit other diseases like Avian malaria and Lymphatic filariasis.

The Aedes Albopictus is another species of mosquito that is commonly found in Texas. It’s called “Tiger” because of the single white stripe that runs down its body. It also has black and white markings and unlike other kinds of mosquitoes, Asian Tiger bites during daylight.

They carry many diseases including dengue fever, Zika virus, and West Nile virus. They can be found near standing water in holes in trees, tires, and planting containers

While a typical mosquito lives for only three weeks, the Asian Tiger Mosquito can stay active for up to six months in enclosed spaces like garages.

That’s a long time, which is why it is important to reach out to a pest control specialist to help you battle mosquitoes infestation and prevent other pest problems.

This variety is one of the most widespread mosquitoes in the U.S. It has white bands along the abdomen and during the winter season, they are mostly found in water.

They breed anywhere they can find water – along the roadside, puddles, ditches, pools, landscaping, etc.

This variety usually bites during dusk or dawn and they transmit a vector called Dog Heartworm.

What do Mosquitoes Eat?

One interesting note is that male and female species of mosquitoes consume different things for different reasons.

Male mosquitoes rarely feed on human or animal blood. The mouth of a male mosquito is not strong enough to bite through flesh. They eat sugary items like sugar, nectar, etc. This means they do not transmit any disease whatsoever.

On the other hand, females have mouthparts long and sharp enough to pierce the skin. They need protein from our blood to help them produce eggs. Female mosquitoes are vectors (they transmit diseases to animals and humans).

When does Mosquitoes Season end?

Unfortunately for most Texans it doesn’t.

The fact is, mosquitoes need water to reproduce, and if there are water sources available, you’ll find mosquitoes – no matter what time of year it is..

Since most of Texas is a milder climate, we generally don’t see much of a decrease in mosquito activity unless it gets below freezing for a long period of time..

What this means is that their population is solely based on environmental conditions. And heavy rain, even in winter, can spike their numbers.

That’s why it is important be aware of the types of places that attract mosquitoes and how to deter them from setting up residency near you home.

If you’re looking to avoid the annoying bites and illnesses they transmit, we’ve gathered a few DIY tips to help you prepare for mosquito season and possibly prevent them from bothering you the next time you’re trying to enjoy your outdoor space..

SCHEDULE AN APPOINTMENT WITH US TODAY! 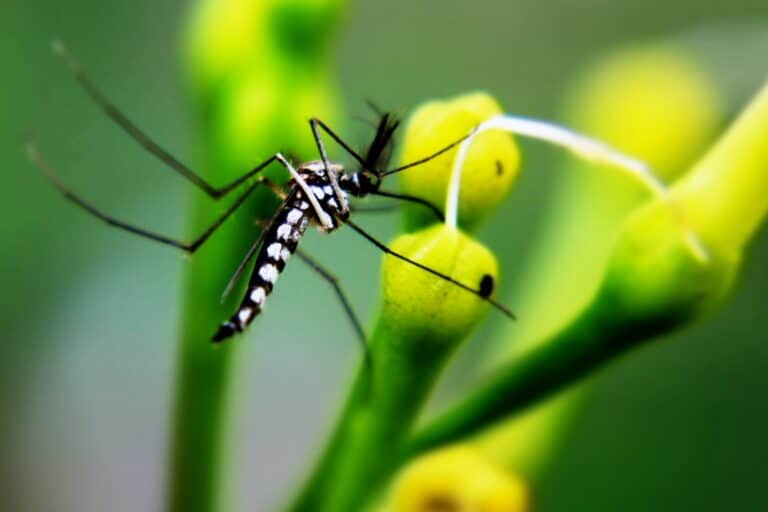 Mosquitoes season is around the corner! Other things you can do to help prevent and control mosquitoes in your house include:

When Should You Contact a Mosquito Pest Control Service?

Mosquito control is often difficult for homeowners to handle on their own. Mosquitoes breed just about anywhere and they double their population in the blink of an eye!

They could also swing by from your neighbor’s home who isn’t as vigilant as you about preventing them.

To truly tackle mosquito invasion, you’ll need help from a pest control professional in Plano, TX. That’s why many homeowners sign up for an ongoing mosquito control service to get a handle on mosquitoes in Texas.
Prevention is always a smart move, but sometimes it’s just simply not enough.

For best results, contact a pest control company before you’re in the middle of mosquito season.

A pest control professional can evaluate your home and property and provide a mosquito prevention solution streamlined to your home and needs.

At SAFE PRO PEST CONTROL, we thoroughly inspect your home inside and out to work with you to provide a pest control plan that is convenient for you and your family.

Our mosquito control professionals know exactly where and how to target mosquitoes around your property.

Do you want to protect your family from the annoyance of mosquitoes season? We’re here to help you make sure your home is free from pests. Contact us today to learn more about our services!